This article is about a simple and obvious idea which I call Cycle & Ride.

Bus routes may be carefully drawn to provide the highest potential usage to an area. The route maps may look quite well designed, but the last mile problem remains. In the case of public transportation, the last mile problem is particularly difficult due to the monopoly status of automobiles. Transportation systems in Texas are designed around automobiles, often without providing for any other mode. Even though the possible paths to the bus stop may be clear on a map, those paths are occupied by speeding hulks of metal and plastic that may easily and suddenly end your bus-minded travel plans. For this reason, bicycle paths must at least meet the minimum design of a cycle track where cyclists are protected from automobiles.

The Park & Ride center is a well known attempted solution to the last mile problem. The idea is for the passenger to drive a car to the bus stop, park the car, and transfer to the bus. The Park & Ride is usually combined with a Transit Center where multiple buses make stops. This is at best a one-part solution to the last mile problem, since there is usually no car waiting at the destination bus stop. Another problem is the combination of competing transportation modes. Both the bus and the car travel relatively long distances on the same roads, so why switch from one to the other when they both accomplish the same goal? 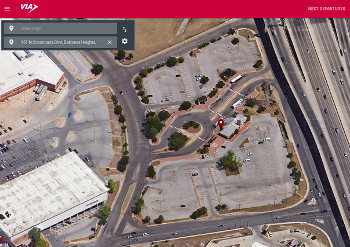 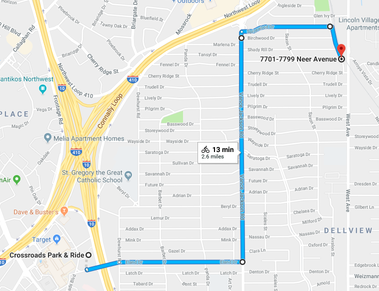 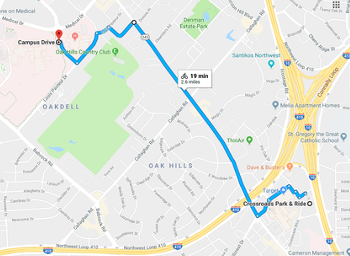 We will take a look at the Crossroads Transit Center Park & Ride, located at 151 Crossroads Blvd., San Antonio, Texas. The Crossroads Park & Ride has 500 parking spaces. We can estimate that each parking space will occupy an area of 260 square feet (9 x 18 feet, plus 11 feet for half of a lane section), while the area for a generous bicycle parking space is approximately 24 square feet (6 x 4 feet). We can estimate that the parking lots cover 130,000 square feet, or nearly three acres. Let us imagine this parking lot transformed into a bicycle path and translate this area into a 6 foot wide bicycle path, the result is a path that is 4 miles long. It is not hard to see that the paved area for a cycle path may be far more useful to many people than a parking lot.

To create the Crossroads Cycle & Ride infrastructure, I propose that a bicycle path, of a cycle track design, be placed so as to begin at West Rd. and Neer Ave. and then to Vance Jackson Rd. to Eland Dr. and to North Crossroads Blvd. The route gives bicycle access to a residential area and should easily accommodate access for more than 500 people to the Transit Center. To carry the idea a bit further, a similar bicycle path, about 2.6 miles long, could be placed along Fredricksburg Rd. and Louis Pasteur Dr. to the Medical Center. This particular path involves an uphill climb, so you may want an electric bike.

The TrafficCounts database indicates tens of thousands of daily commutes to the Medical Center. Anyone in this area knows the traffic congestion is stifling. Imagine the space taken by automobiles and compare that to the space taken by bicycles (even electric bicycles) and suddenly the congestion has been ameliorated.

So, for a little more than 5 miles of cycle path, we have a transportation alternative for hundreds or even thousands of people to use every day. This may seem outlandish to many people, but we must stop regarding the automobile as a sacred object to which we are tethered in perpetual servitude.

It might also become possible for the transportation bureaucracy to sell some of the parking lot area to tax-paying private owners. They might even find a way to plant dozens of trees in that area. There are numerous possibilities that come to mind when one thinks about the Cycle & Ride concept.

Your own Cycle & Ride design:

You too can design a Cycle & Ride plan. Simply locate a Transit Center on Google maps, choose a nearby destination, click the get directions link, and arrange the points of google's route so the route follows your idea. Then take a screenshot of your map and submit it to the transportation bureaucracy with the heading Proposed Cycle & Ride Track. It doesn't matter if someone else has another idea or even the same idea. What matters is that you see the possibilities and communicate that to the transportation bureaucracy. We need choices that are attractive to people and useful in a practical sense, so don't hold back your better ideas. I encourage everyone to devise their own Cycle & Ride plans and submit them to:

Building a world of resilient communities